You are here: Home1 / Latin

Salsa is the Spanish word for “sauce” denoting a “spicy” and “hot” flavor to this popular dance style to a complex mix of many different rhythms. There are indications the term Salsa was coined by radio disc jockeys in Puerto Rico as early as the 1960’s. Later associated with a New York sound developed by Puerto Rican musicians, Salsa is considered the national music and dance of Puerto Rico. The fusion of an Afro-Cuban beat with enhanced jazz textures results in an aggressive high energy pulse which has become popular everywhere. Many of the patterns are closely related to those of the Mambo and Cha-Cha.

Originally a Spanish dance in 3/4 time, it was changed in Cuba, initially into 2/4 time, then eventually into 4/4. It is now presented as a very slow type of Rumba rhythm. The music is frequently arranged with Spanish vocals and a subtle percussion effect, usually using Congas or Bongos.

The Merengue is a popular dance of Haiti and the Dominican Republic and is a truly lively Latin dance. There is an old tale about a very brave and famous military officer who was wounded in battle and developed a limp. A celebration dance was given for the great hero returning from the war. Rather than embarrass their hero, who limped on his wounded leg while dancing, all the men present favored their leg as well, & thus the Merengue was born.

The Paso Doble is a theatrical Spanish dance that characterizes the man as the matador and the lady as his cape. Based on Flamenco dancing, the character of the dance is arrogant and passionate. Paso Doble translates to “Double Step”.

The spicy Mambo as we now know it grew out of the Danzon (national music of Cuba) and grasped the imagination of the American dance scene at the close of World War II. Later, fast Swing-Jazz and upbeat Latin music joined in to form the updated and uninhibited Mambo. The Mambo is a spot dance, and the steps are quite compact.

The Rumba was originally a courtship, marriage, and street dance that was African in origin. The Rumba met some opposition from society’s upper crust because of the suggestive body and hip movements. The characteristic feature is to take each step without initially placing the weight on that step. Steps are made with a slightly bent knee which, when straightened causes the hips to sway from side to side, in what has come to be known as Cuban Motion.

An exciting, syncopated, Latin dance, which originated in the 1950s as a slowed down Mambo, the Cha-cha gathers its personality, character, rhythm, basis, and charm from two major dance sources. It is a derivation of the Mambo through its Latin music, and it is also a stepchild of the Swing, as it is danced to a 1-2-3 step rhythm. The Cha-cha gets its name and character from its distinct repetitive foot rhythm. 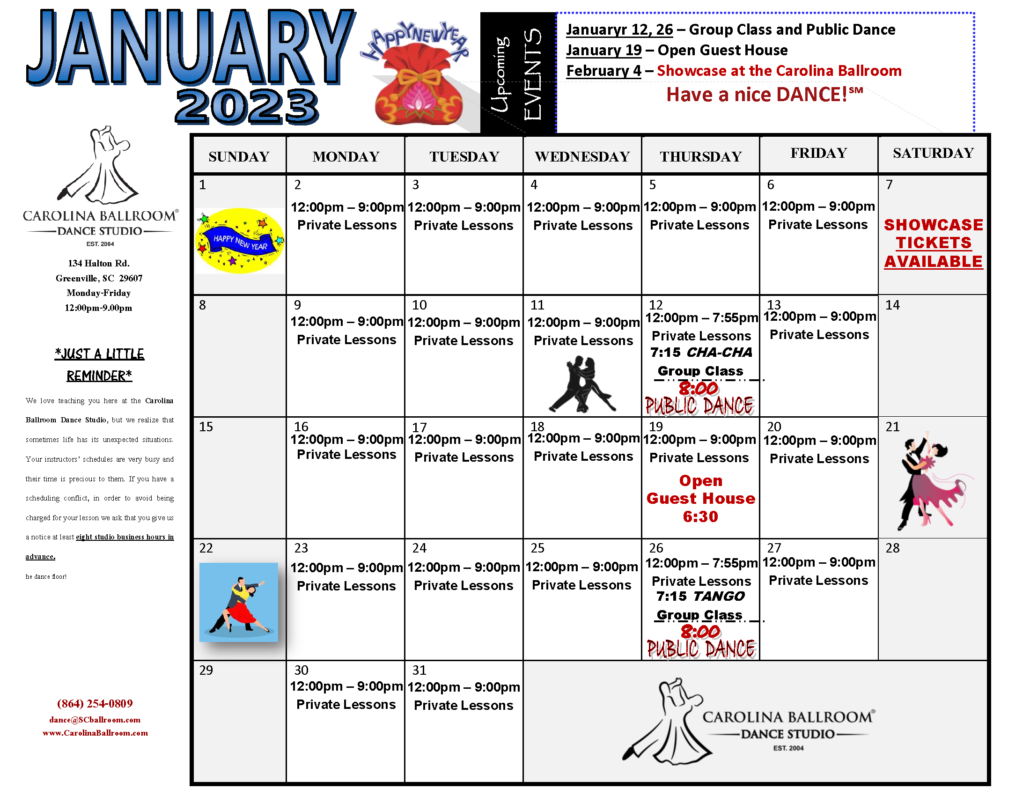